This weeks theme was eyes. I wanted to find a fish, put sunglasses on it and do a "Fisheye Lens" ;-) But no time to go out and buy a fish and we don't seem to have any stuffed ones around. So I used the eyes of my fishing rod instead. Actually got Jen to hold a fishing rod! 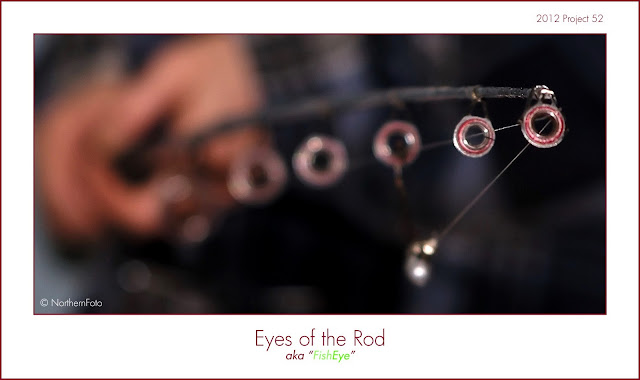 Yup, two posts in one day ;-)   I was productive this morning.   Got up and thought the sky was pretty interesting so dropped the gopro outside and let it record.   Sped the video up and gave it a bit of a rolling sky. Still not the sunrise I'm looking for but good practice overall.  Enjoy.  Click the YouTube link to get the bigger version.  Much better.

My first attempt at doing Startrails, something I never seem to think of doing in the summer.

Basically, startails is done by doing either 1 really long exposure (not recommended) or doing a series of long exposures and then putting them into a single image.  My result is below; 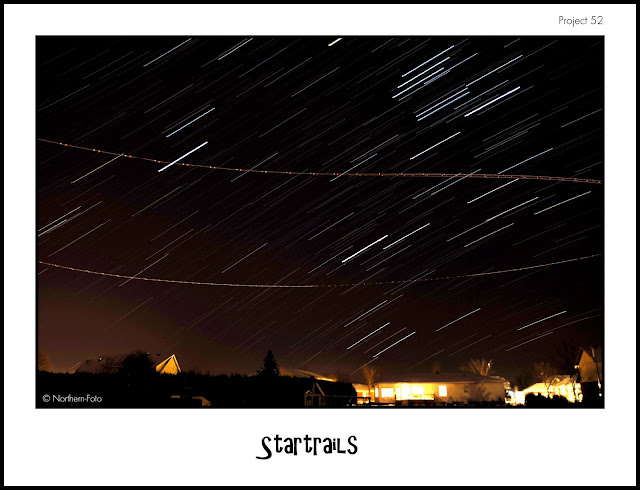 Now like I said, this was my first attempt so I didn't exactly do what I wanted.  The horizontal red lines are actually airplanes that crossed while I was taking the picture.  As I hope everyone here is aware, the stars move around the night sky (well actually it's the earth moving, but you figure it out hahaha).  For the most part the north star doesn't move and can be used as a fixed point in the sky and if you do enough or a long enough exposure you can see the stars rotate around it.

Not my picture but here is an example: Now my image above was looking into the southern sky and not long enough to see how circular it can become.  To the north of my house is the city of Ottawa and it was showing quite a glow on the horizon so I decided to try first to the south just to see if it would work.  AND IT DID!!!!

BUT......it wasn't a complete success.   The temperature outside was -16c.  That coldness combined with 30 sec exposures one right after the other ended up killing the battery in about 32 minutes, not the desired 60-90 minutes that I wanted.

So how did I do it?  Simple!   You need a tripod, a shutter release cable that has a lock feature (you can get them on e-bay from china for about 3 bucks) and a camera with manual mode.  Set the camera to manual mode.  These settings worked for me - Aperture f2.8, shutter 30 secs, ISO 100.   Focus on something far away so that the lens goes into infinity mode (half press your shutter for the focus).  Then turn off your Auto Focus.  Switch your shooting mode to continuous.  Frame your image with the camera on the tripod - normally you want to the north so you can get the circular pattern or you can do like I did.  Press and lock the remote shutter.   Go inside and have a coffee and watch some TV.   Whenever you want, 20 minutes - 7 hours later, go out and stop the picture taking.

Now your left with a pile of photos, what to do with them?  In my case I shoot RAW format so I had to convert them over to jpg.  The reason I shot RAW is so that I can fix issues with the images before conversion if needed but to date I rarely have to do this, so shooting in jpg is fine.  You could combine all the images (I had 50+) in photoshop, but that is one serious pain.   So a bit of digging around the internet found a really nice piece of shareware called Startrails - http://www.startrails.de/html/software.html

Just load all the images into the program and it creates a single image.  Way to easy and way cool!

Another thing you can do, if you have enough images, is you can make it into a time lapse movie.... a project I plan to try when it's warmer.

There are tons of tutorials around the internet on how to make these cool looking images.   Just google startrails and you'll be all set.

If I get another clear evening this week, and it's a bit warmer, I'll attempt one to the north to get the circular effect.
Posted by Unknown at 10:18 AM No comments:

Sort of ran out of time this week so quickly threw this one together. Bit of water and hair colouring haha.   I can do better :-/  but it gets the point across, I think?

Posted by Unknown at 8:57 PM No comments:

A couple of more video's

Wow what a week with all the snow and cold temps.  In the end it seems like my 2 day weekend was rather short, haven't even gotten around to shooting my weekly shot for the Project 52.  Will have to get that done tomorrow evening.  But I did find some time to shoot some more time lapse with the GoPro.  One during the storm and one after.  Mostly silly with some rather obvious flaws but they were fun to make.   I plan to try some more serious stuff in the future ;-)    It has also been  fun learning how to do video editing.  It has given me some good ideas for doing some stuff with my regular photography and then using video software to enhance it.   A project for another day.

Posted by Unknown at 8:12 PM No comments:

What a beautiful day outside!   I had intended to go take a few winter shots of Watson's Mill but part of the reason of doing the Project 52 is to step outside of my boundaries and shoot things that I don't normally do.  I know the Mill well enough, I'll save it for some night work ;-)

So grabbed Jackson and the camera and headed out around the neighbourhood on our daily walk but with photography on my mind.   This is the one I published for the week, by far the best snowman in the neighbourhood; 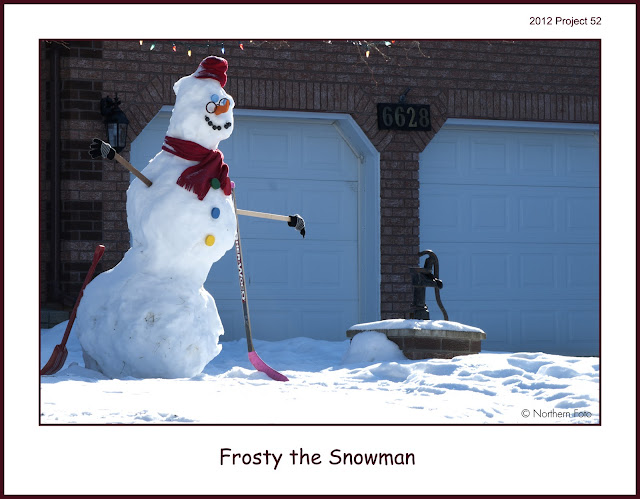 and these ones I really liked;

Posted by Unknown at 3:09 PM No comments:

Well it didn't take me long to figure out how to hook the gopro up to the dog ;-)    Naturally it looks like something out of the Blair Witch project but as a result I was forced to learn the basics of video editing.   When faced with a 3.2gb file you have to do something.

In the end it came down 40 some megs and on YouTube.  Naturally the quality is not near as good as the full HD from the camera itself but I have no idea how to post better qualities unless I purchase an account?  Or maybe put them on my own webpage?   I'll have to experiment with that little problem.

The video is down to 6 minutes from 33.  It had really cool music with it but for some reason YouTube thinks the song is copyrighted and removed my audio track.  So when watching the video be sure to hum the theme song to the Andy Griffith show ;-)  Click on the YouTube thingy on the bar to see the bigger version.

Posted by Unknown at 2:34 PM No comments:

My wonderful girlfriend got me a GoPro Hero II for Christmas ;-)   http://www.gopro.com    Now I'm not much into extreme sports so mine will be time-lapse work, videos of the cats and dogs, snow-snowing, kayaking, canoeing and other boring stuff once I figure out video editing.   The camera itself is really cool and easy to use.  Picked up a few accessories for it (LCD back, spare battery, tripod mount etc..) and started downloading video software to play with.

If you want a really cool little HD video camera that can be used as a normal camera and has really cheap accessories, check this little puppy out.  It's fun!

This was my first attempt at a time-lapse and using YouTube.   Got up this morning to -20c and a wicked windchill of -30c.  But the sky looked like it was going to be a good sunrise so put the camera on 2sec interval and let it snap away.    Retrieved it 15 minutes later and pieced together a time-lapse video.   Let YouTube add some music and there it was.   Not the greatest quality but hey, I gotta figure this stuff out.    The sunrise started out looking really good but then it fizzled out on me :-(

Our first assignment was New Years Eve/Day.   My submission; 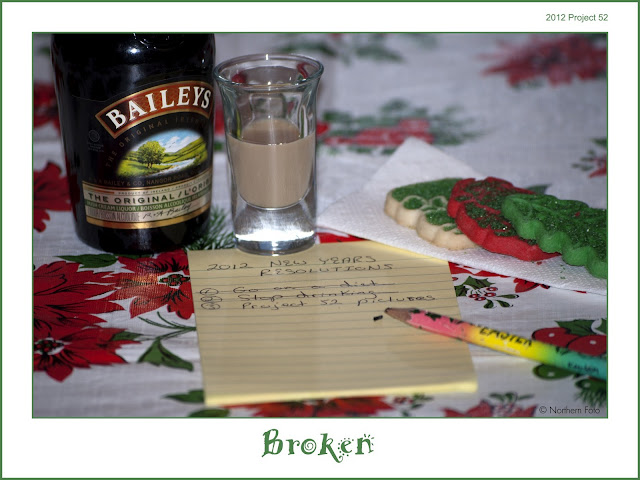 I keep saying I will but then I don't.   I think part of that is due to the social media webpages.  Facebook and Google + seem to be my downfall.  It's easier to post 1 lines I guess and there I can keep up to date with most of you.

The 2011 recap - it was an up and down year.   The upside continues to be my life moving forward.  Jen and I moved in together to a new house for both of us and continue to be happy.  Jackson came into our lives and life is good.  The downside has been the dragging out of my separation/divorce.  The never ending story.  Over a year and a half now and nothing has been resolved.  More money in the lawyers pockets and I suspect it's going to get worse before it gets better.  But I want this over in 2012 so I can completely put it behind me.   We're planning a trip to Florida in April, I hope a trip to Bermuda shortly after that and maybe a run down east in the summer.   All to be determined yet around any work travel that I might have upcoming.

Jen and I had a quiet Christmas.  A few new toys, mainly a gopro for me - so maybe some video or time lapse in the future??  ;-)    http://gopro.com/    I've been eyeing my old R/C stuff and wondering about mounting the camera on those.  I wanted to mount it on the truck this past week but with all the snow, salt and slush on the roads I figure the case will just get gummed up to quick.   Need a drier day.

To try and get the photography juices flowing again, I've joined a Google+ 52 week project for the coming year.   I thought of doing the 365 project but with my work schedule there is no way I'd be able to post a picture every single day of the year.   I tried in the past and that didn't work out well, but a picture a week I think I can do.  The project has a different theme each week to try and get people thinking.  The first one, new years day, is due tomorrow so I have some ideas that I will be trying to shoot today.   So that should give me at least 1 blog post per week!  ;-)   But I hope it will kick start the imagination and get me moving again.  But if you have Google+ check it out, there are going to be some great pictures over the coming year - https://plus.google.com/u/0/107553450680914912872/posts

Wishing everyone a great 2012!!!   Stay in touch.   Sometimes I can be found on skype but I can always be found on e-mail.
Posted by Unknown at 9:30 AM No comments: