Finally, a few minutes to update things ;-)    It's been a continuous and busy summer to date,  which I guess is a good thing in the summer, means you've been doing things!    This summer has been pretty awesome so far.  Unlike most years the weekends have been sunny and great for canoeing.   Jen and I have been out on numerous day trips, all the on the Rideau River so far.  That has resulted in a lack of pictures.   I've photographed the Ottawa end of the Rideau River/Canal to death so it's been tough to get the motivation going.   I take the camera but it never leaves my dry bag.  Bad me!!!

Took today off in the hopes of doing some paddling but the doppler radar is looking ugly so we're delayed until tomorrow.


Last weekend I finally got to a new lock on the Rideau.  Surprisingly it's one of the closest locks to the city of Ottawa yet I'd never visited there.   Just 2 minutes from Hunt Club along Prince of Wales Drive is Black Rapids Lock.   I figured being so close to the city it would be a little dump.  Not so!  You'd think I'd learn that each lock on the Rideau has it's own special charms.   Unfortunately it's one of 3 locks that isn't hand cranked (and will never be switched back now that it's a heritage site) but it's still a very nice spot.   Simple to get to and lots of lawns for a picnic, check it out even if you don't boat.   For canoers and kayakers, there are 2 wonderful floating docks on the south side and I believe one good one on the north.  You will need to bring your boats down from the parking lot but it's not to bad.  There are meters in the parking lot, 4 bucks for the day. 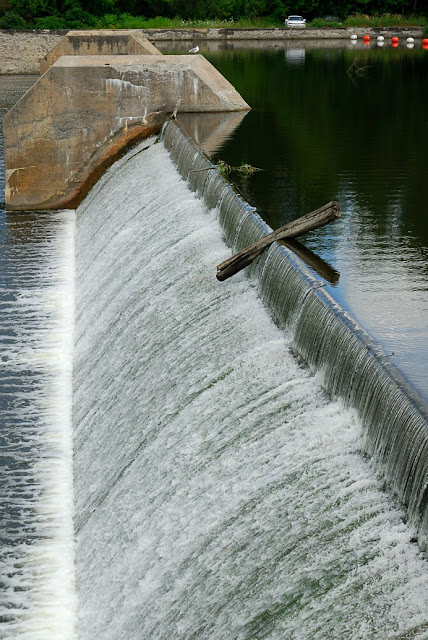 Not bad considering this is still within Ottawa city limits.  On the south side it's about an 8km paddle down Long Island Lock in Manotick and the current isn't bad.  So a round trip from Black Rapids to Long Island wouldn't be all that difficult.

On the "life" side of things it's been busy as well.   The newer job I'm in is very demanding but I have to admit it's rewarding and I'm enjoying it now that I've put my stamp on it and have created the relationships necessary to function in the position.  What the longer term will be I don't know yet but I should be there until Nov or Jan and then back to my old job I guess.  But I'll return with a new look on things.

Jen and I are starting to prepare for the big move next month.  Not much packing done yet but it won't be long now.  Just 1 more month until we get the keys to the house and we start merging 2 households.   The movers are booked but lots of logistics in front of us.

The divorce is slowly moving forward.   Finally got served the papers that I've been waiting for since Feb and have been in paperwork hell to get everything in order.   Yesterday I attended the new mandatory MIP session that the department of Justice puts on in the Ottawa court house.   It's a decent presentation but way to late in the process.   It gives good information about alternatives to court, such as mediation and arbitration.   All things that I have been trying to do over the past 14 months and have gotten nowhere with.  Another date with the lawyer next week to finish up some paperwork and then probably to our first court date (case conference) in early Sept.  I keep holding out hope that she will come to her senses and see that this is an easy case that can be settled quickly in mediation.   Court is going to cost both of us a fortune.  I'm not kidding when I say the only one who wins in these things is the lawyers.   When this is all said and done I think I'm going to write a full article on the past 14 months so others can see the process and where it all goes wrong and what to expect.  It's all very confusing and frustrating.  If people would just put their emotions in check it can be a very easy, simple and straight forward process.   But more on that another day ;-)

Today is a no go for paddling but the next 3 are looking really good.  Just need to check the winds.  Time to put the boat on the truck (before the rain hits) and we'll be good to go.  Jen and I have been at the farm most of the week while her daughter was off at camp but now we're moving to her place for the weekend.

Hope everyone has a great long weekend and I pledge to try and take more pictures ;-)
Posted by Unknown at 5:53 AM 1 comment:

Well happy Canada day everyone!   Hope everyone has had a great weekend.  Those of us here in Ottawa have been blessed with outstanding weather for all the festivities.  On top of that we had the royal visit!   For Jen and I the weekend is still going on as we both have Monday off as well.

Friday we started the weekend off a day paddle from Burritts Rapids Locks down to Upper Nicholsons Locks.  I had expected the waterways to be a bit busy but there was almost no boats around at all.  It seems they were in the city to catch the royal visit. 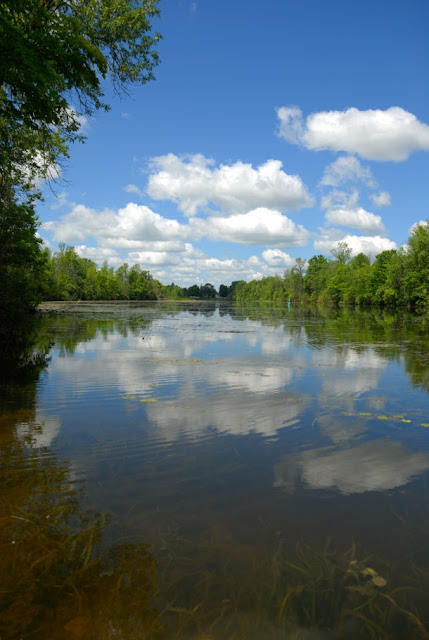 Finished the paddle up with a well deserved ice cream from the store beside the lock and then back to the city to Jen's place.   I dropped her off and left for my house and she packed up to head there as well for the next couple of nights.  A light supper at my place followed by a short evening rest, we packed up the camera gear and headed to the town of Russell to catch the fireworks.  Thoughts of going into Ottawa, where the press was reporting 300,000 people, was not appealing and Petrie Island near Orleans didn't sound like it would be overly quiet either.   So we took a chance and headed south.

Absolutely no regrets!  We arrived almost 2 hours early with barely a soul around.   The firemen were setting up for the show and had buckets out for donations from people who wished to watch, but no pressure to donate.   The firemen spotted my tripod and they quickly pointed out where a great spot would be to catch the show.  10pm we sang the national anthem and the fireworks show began.  It lasted a full 20-25 minutes and it was WONDERFUL!   Rumour has it that the Lions Club in Russell had spent $7500.00 on the show.  I'm glad I gave a nice donation cause I'd love to see them do it again next year.  Was only about 300-400 people and it was enjoyed by all.  I'm telling you, get yourself out to the small town fireworks show, they can be a hoot! 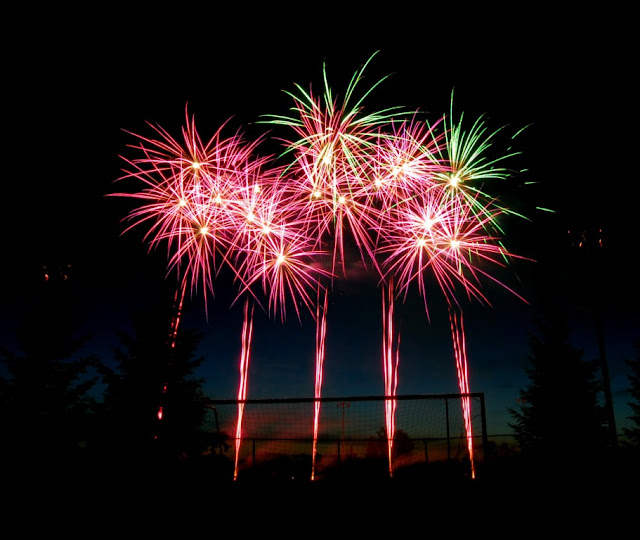 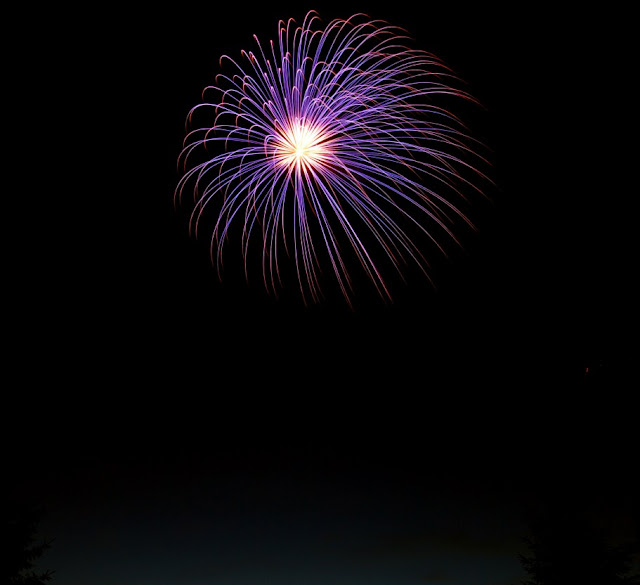 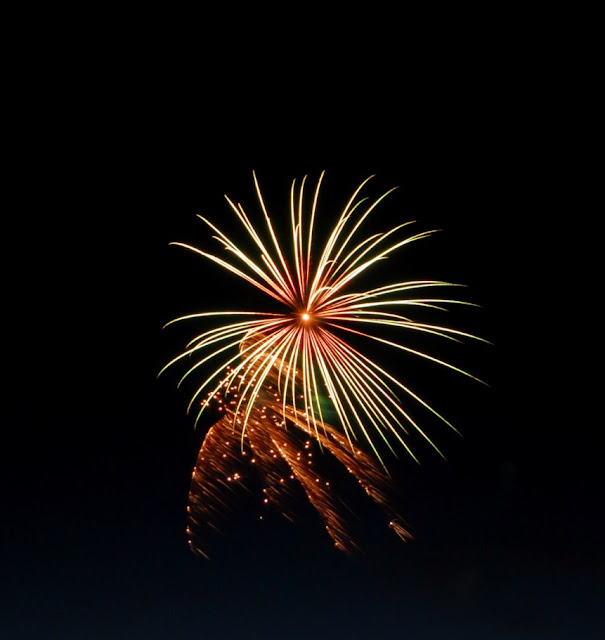 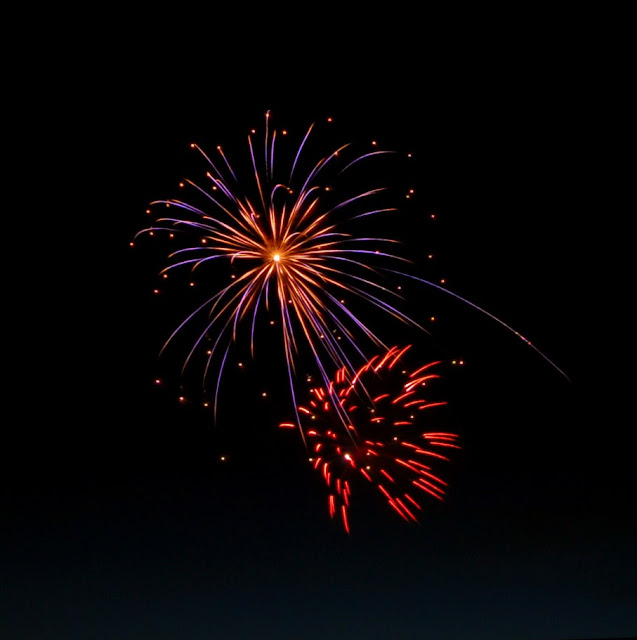 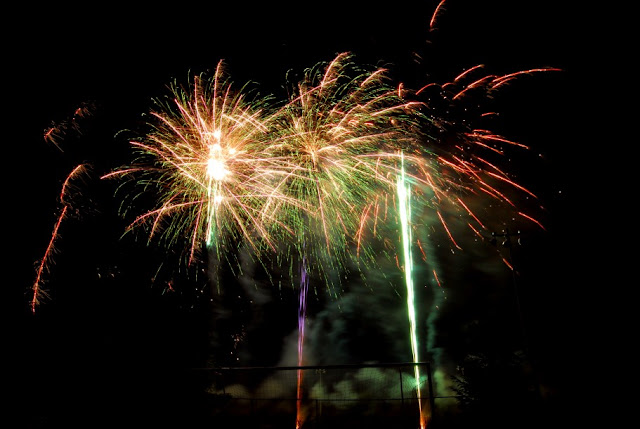 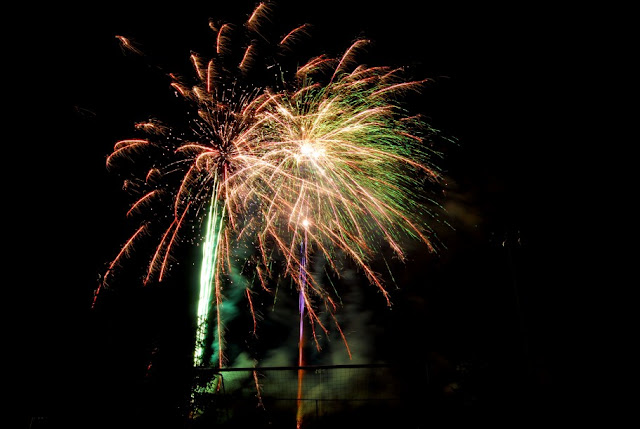 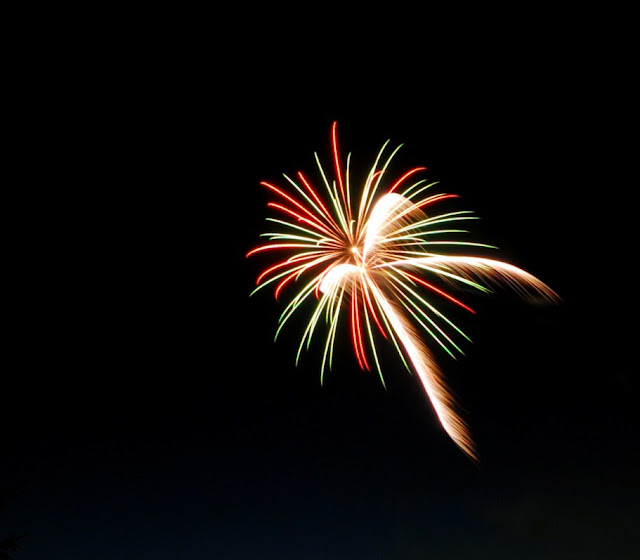 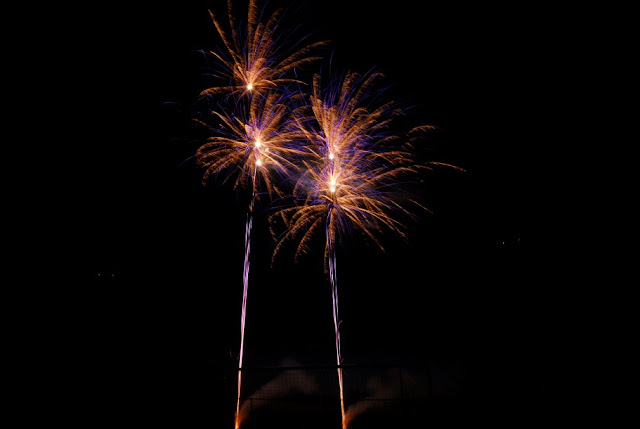 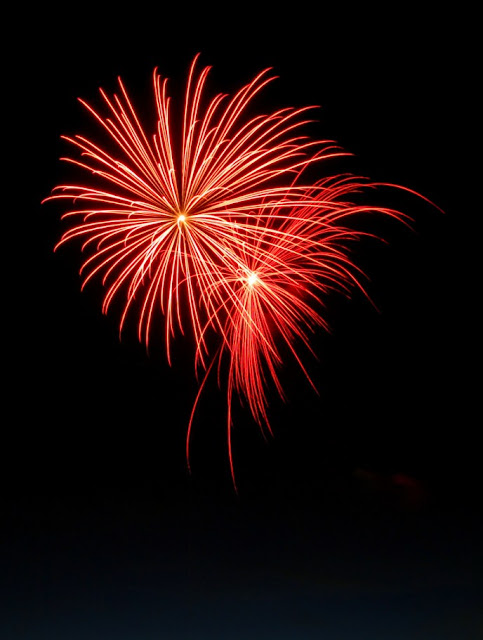 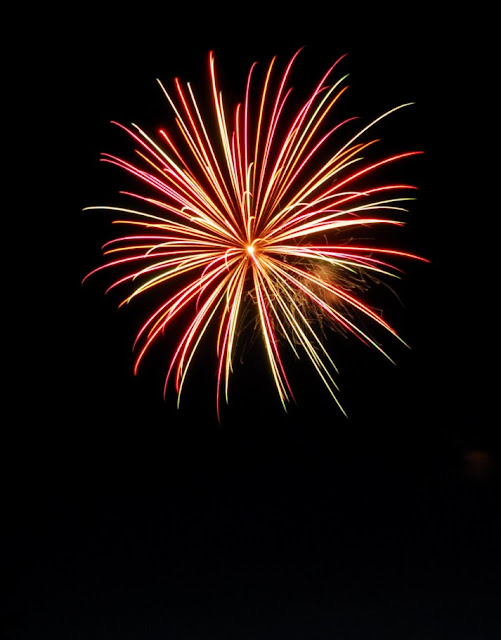 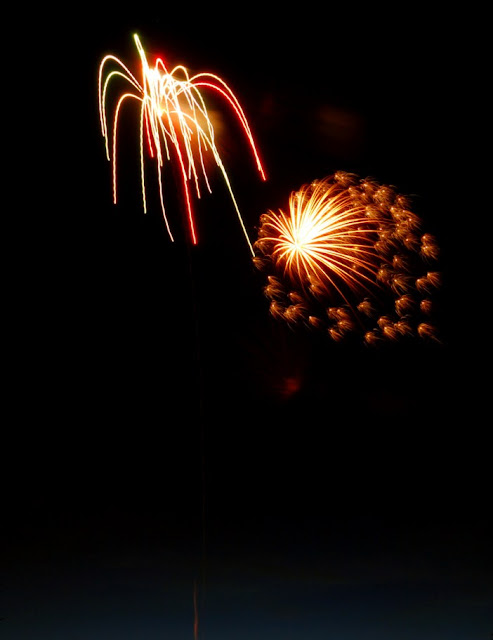 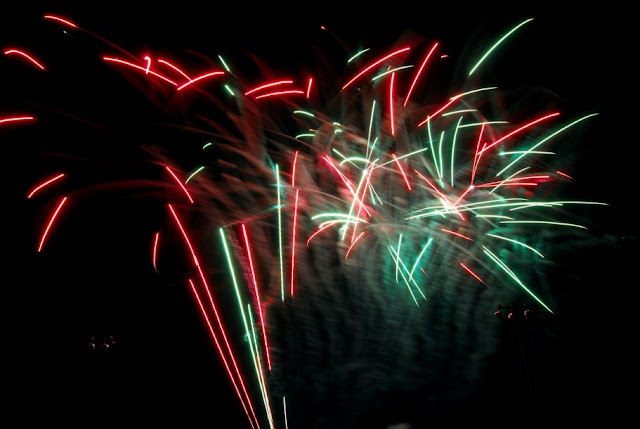 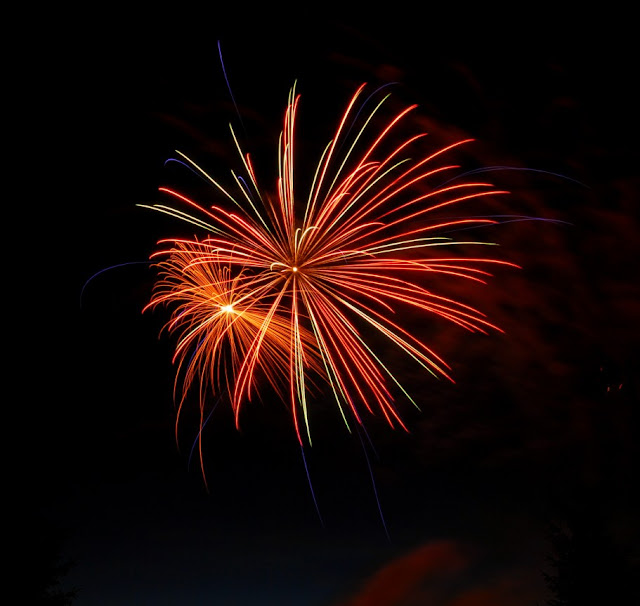 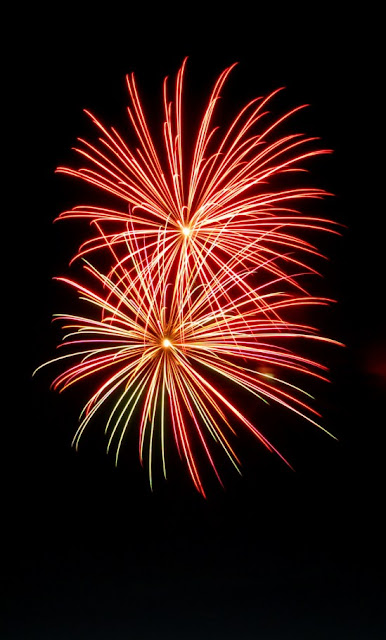 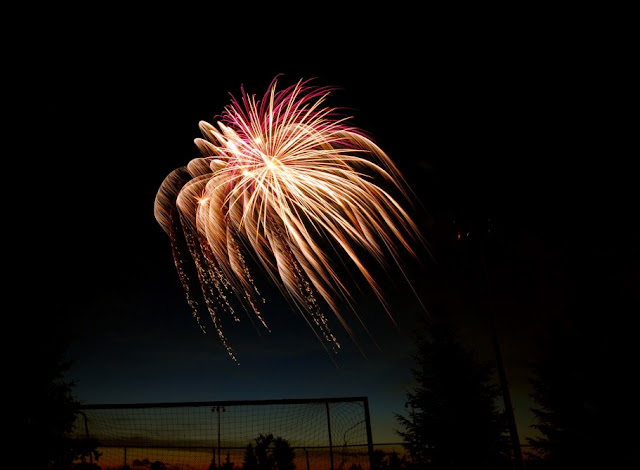 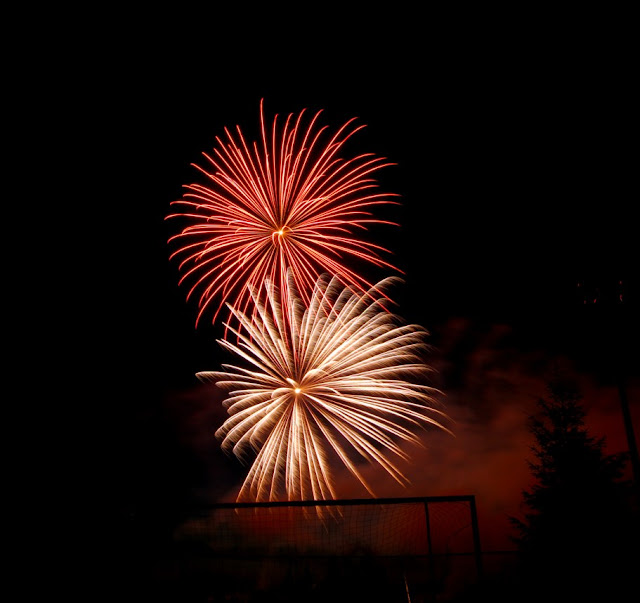 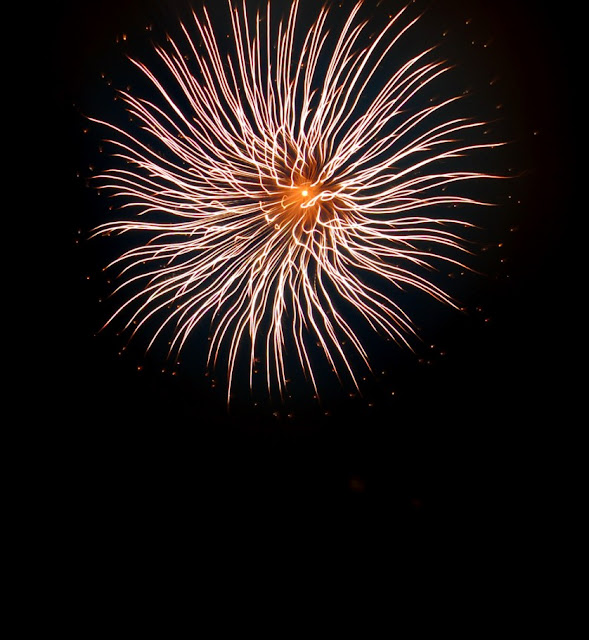 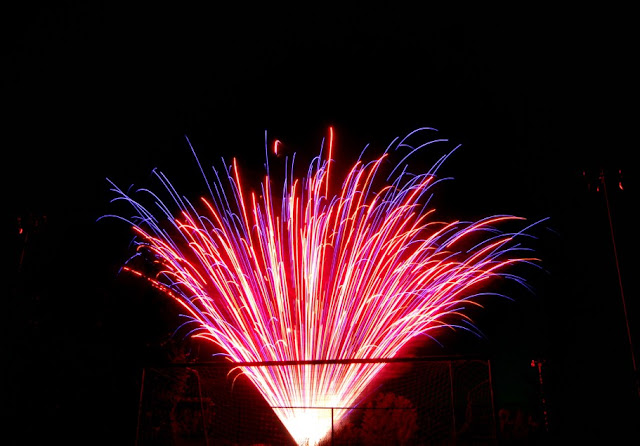 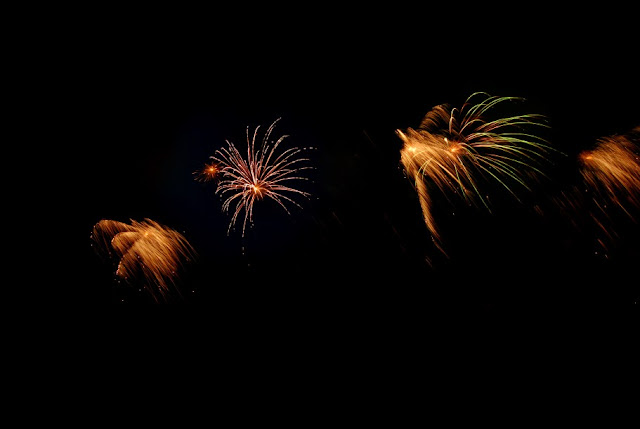 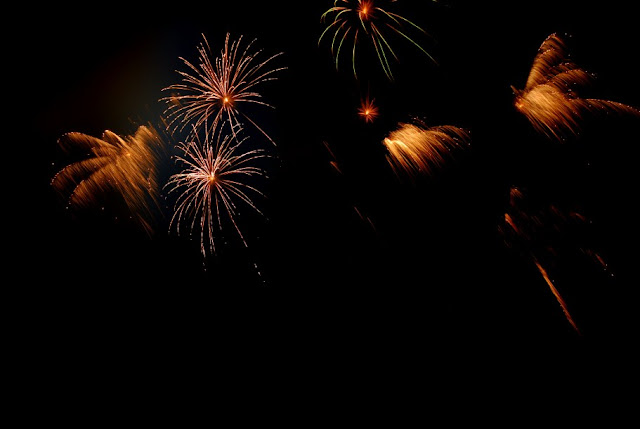 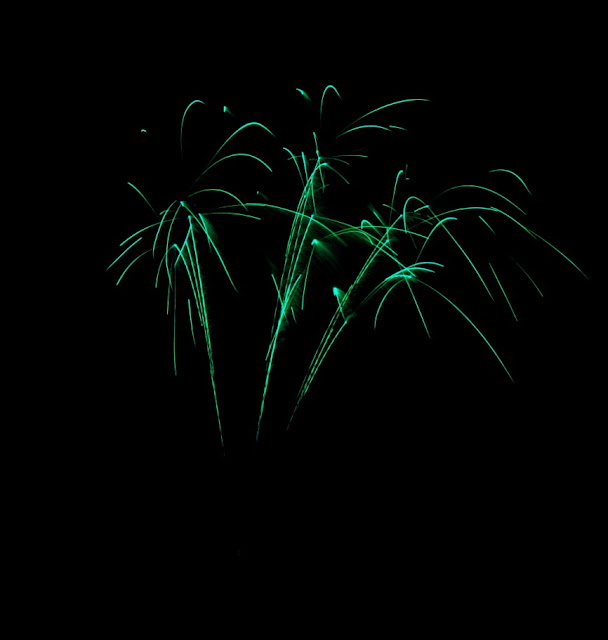 Saturday was crazzzzzzy!   Jen and I headed into Orleans in the morning with the intention of picking up a patio set for a family party that afternoon and for the new house (that story in a sec).   What a zoo!   After hitting 5 different stores looking for a decent patio set we ended back where we started - Walmart.  They had the best deals by far.   Now do you think that set would fit in my RAV4?   Almost, but not quite!   So here I was in the parking lot, 10000 people, hotter then hades, ripping the box apart and putting it into the truck piece by piece.  Then off to Farm Boy (another zoo) and DQ for an ice cream cake.   This family party was a late birthday party for Erin who's birthday was a week prior.

So, should only take an hour or so to put the patio together....sigh.....now I know why Walmart has the cheapest prices.   Absolutely nothing lined up.  After 3.5 hours of struggling and bending everything back into shape the patio set was completed as our guests arrived.  Great timing, they showed up to see a sweating man dieing of heat and frustration hahaha.   A quick cold shower and a few beers later and the world was right  again.  For those who haven't tried the Bud Light with Lime (BLL) get out there and get some, it's damn good!

A wonderful evening with my new extended family - corn on the cob, BBQ'd port chops and shrimp, potatoes with carrots, salads, vegie trays etc etc... Lots of beer, wine and a few other liquids.   A great time was had by all.

Sunday morning Jen and Erin have now packed up and headed back to their place for the day.  They're off to the Katie Perry concert in Ottawa tonight.  One of Erin's birthday gifts.  For me, peace and quiet with the left over BLL hahaha.   Although it's hot here today so the beer is going down easy!

For those who haven't heard, I'm on the move at the end of the summer.   Jen and I have found ourselves a lovely house just south of the city and we're going to be renting starting the 1st of Sept.  A lovely sidesplit in the town of Greely.   Three bedrooms, 2 baths, rec room, natural gas, A/C, double garage, 6 appliances etc etc...  About a half acre lot as well.   I didn't take these photos so apologies for the small size. 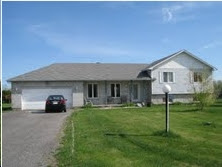 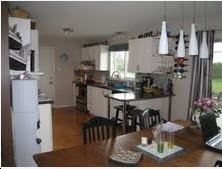 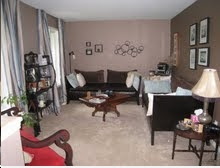 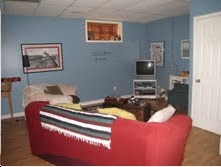 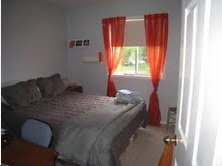 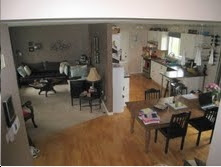 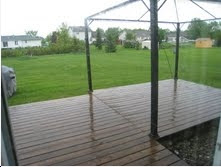 I'm going to miss the farm but it was a great transition place for me.   I will always have happy memories of this place but now it's time to move on.

Tomorrow Jen and I are both off work.  My boss has decided that I work to many hours and has mandated that I take a day off every 2nd week.  Where I work it's called a compressed work week.  Just means I work an extra 50 minutes each day and I get every 2nd Monday off.  The reality is that I've been doing almost 2 extra hours per day without even trying.  The canoe is loaded up, the weather forecast is for sunshine and light winds so we're off to paddle the Rideau from Hartwells Lock to downtown Ottawa tomorrow morning.  More pictures coming later this week if all goes well.

Two weeks from now, a friend who I haven't seen in a loooooooong time (near 30 years), is coming to visit with Jen and I.   I'm looking forward to seeing Nat again and Jen is looking forward to meeting her.  Last time I was face to face with Nat we were 13 I believe at (now get this) BIBLE camp! hahaha..   She and I reconnected on Facebook about 4 years ago and have been e-mailing ever since.  She's up to the city for a conference and is going to hang around for a few extra days.

On the negative side of life.   Cathy has finally raised her head with her new lawyer and is trying to book a court date.  Seems she doesn't want to negotiate in any way so we'll see what happens.  I should be "served" with papers later this week and my lawyer and I will figure out the course of action from there.   The upside?  Soon it will be over!!!!  Can't wait.

So that was my/our weekend to date.  Hope everyone else is having a great Canada Day weekend!!!
Posted by Unknown at 4:02 PM 2 comments: