Wow - 8 weeks into the new year already, the time is flying!   It appears I can say the same about winter.  Fingers crossed cause we could still get nailed but this past week has been pretty mild for Feb.   The sun is been out most days this week and the snow is melting and evaporating.  Maybe the stupid ground hog was right for once..... we'll see, cautiously optimistic.

Was a strange week.  Monday was the work grievance hearing.  Not sure how it went but it went 40 minutes longer then it was suppose to and I felt pretty battered by the end of it.  It was more confrontational then I would have liked or when compared to other grievances I've been involved in.  But we made our case and it's in the hands of the "jury".  Should know within the next couple of weeks if we were successful or not.  From there we have to decide if we want to go to a formal process or let it go.

Thursday afternoon I got the first half of my new tattoo.  The main piece (an inukshuk) is pretty much completed and when I go back in a few weeks the snow and full moon will be added.   When done I'll put a picture up for a few days for everyone to see.  The inukshuk is awesome, Greg at The Ink Spot did an amazing job.  The rocks look real.  He knows how to do realistic work.   Walking around with muscle shirts this weekend to try and help it heal.  Pretty sore but coming along nicely.   Looking forward to the rest of it, it's going to look amazing. 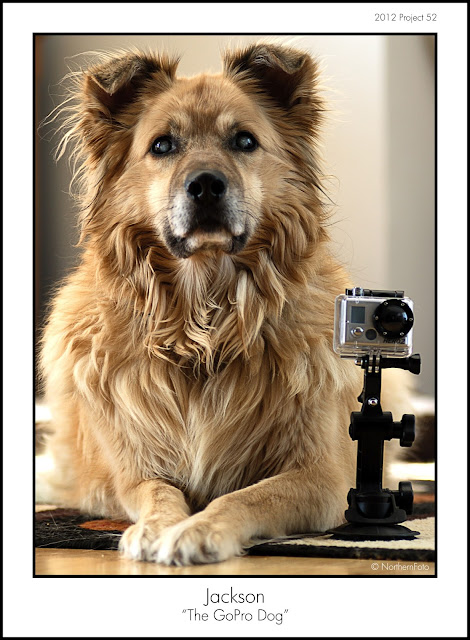 One of the better shots I've managed to take of him, he was very cooperative this morning ;-) and got himself a treat in the process.

My buddy Glen in Bermuda has joined the ranks of bloggers.  It's mainly to showcase his ongoing renovations at his house but with encouragement maybe he'll do some writing? http://bermudaglen.blogspot.com/   He's a pretty funny guy in real life and I expect he could do the same in writing.  Come on Glen!

That was my week in a nutshell.
Posted by Unknown at 12:35 PM No comments:

Week 7 - Shadows - From the Shadows

Greetings from deep winter ;-)    Only 1 month and 2 days before I head off to Bermuda, can't some soon enough!  Looking forward to seeing my island friends.

Deep into the winter blah's this year but we're keeping a smile on the face and carrying on.  Lots of unknown things going on in my life right now.   Waiting for C and her 3rd lawyer to get moving on the next stage of the divorce mess, still where we were 2 years ago when we separated.  Seems to be the never heading headache.   Changes coming at work.  Looks like a long overdue (and much needed) re-org is on the horizon.   I know I'm in good shape but curious to see what my position will look like when it's over and tomorrow my crew and I head into a labour grievance over market allowance pay.  Spent the past week getting ready for the presentation and preparing our arguments.   We're the first grievance to be heard tomorrow morning at 9am.  Lets hope being the first out of the trench to storm the lines doesn't end with machine gun fire hahahaha

Nice and sunny this weekend but the teasing warm weather that we had earlier in the week ran away.  It's around -20c with the windchill here today so walking the dog was not a pleasant experience.  So deceptive with the sunshine streaming in the back windows, it feels so warm.  Stick your nose out the door and you discover the truth ;-)

This weeks Project 52 theme was shadows.   Naturally most people went for shows of things on sunny days or lights at night.   Trying to continue to treat these themes as outside the box.  What comes to me is, what lurks in the shadows.   Not getting much reaction from the Project 52 people, but I like it anyhow;

As with every other photographer in the world, spend this week drooling over the new D800.   What an amazing looking camera.   But mentally trying to justify a 3k+ price tag.  Not something I could afford easily.    I'm actually not in to bad of shape lens wise.  I have the 80-200mm that would fit it nicely in FX mode and I could look at a Tamron F2.8 to cover the low end.  Another 500 or so.   Sell off some of my DX stuff maybe?  hahaha, the possibilities are there.   But would like to see what they are going to come out with when replacing the D300s.  But that FX D800 is a piece of work.  Going to have to think this one through but for the foreseeable future my trust D200 will continue to keep me entertained.

Well that was the week in review, not much happening.  Just over 1 month till Bermuda, 2 months till canoeing starts and 3 months good spring weather.   Every year I find myself liking the idea of retiring "south" more and more attractive ;-)

Still not sure if I like this new look and feel that blogger has when creating a new post.  Why do websites feel the need to keep changing things for those of us who were content?   Oh well, live with it I guess.

So first up, my shot for this weeks Project 52.  The theme was signs.   Naturally lots of people took great photos of various signs around them.   I was kinda hoping to find a "no dog poop" sign and then have Jackson take a shit in front of it, but that would be the stars aligning ;-)     Once again I tried to think about something besides what others were doing, thus the hand sign - ok. 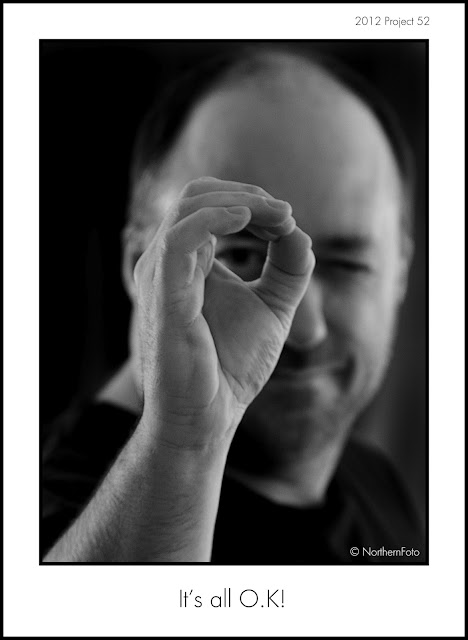 In the process of shooting this I discovered;

1.  My remote shutter cable is to short for me to take a picture of myself,
2.  Guessing at the focus setting, hit the timer, press the shutter and get in front of the lens in time and in focus is a major pain, and
3.  I look much better in black and white ;-)

I thought I was so smart, no one else had posted something like this.  I worked on it for over an hour and once I posted, sure enough, someone beat me by 30 minute - doh!

Had another clear evening on Friday night so this time decided to do the startrail thing again, but this time to the north.   Once again the batteries are just not up to the task when it's cold (-10c) and 30 sec exposures.  The result is only 53 images blended into one.  But now I know exactly where the north star is when I look out my front door.   Just a pain that I have the glow of the city to the north and have to deal with that in my images.

Not a bad week overall.   Still getting the winter blahs on and off a bit, so the occasional self pity party.    Work has been steady but actually been finding some time to do some things that have been sitting on my to do list for the past few months.   Friday I hit an ice snowbank and put a nice dent in the plastic bumper on the truck.  It's down low and not really visible or noticeable to most people, but I can see it and it sucks!

Been working on a new tattoo design ;-)   Jen and I are booked for the 16th.  Not sure if we'll have time on the 16th to get it done but hoping so.   I'm not going to post the image but it does involve an Inukshuk ;-)

That was my week.   Winter continues but we're surviving!  According to the rodents we're suppose to have an early spring.  I'll believe it when I see it.   Only 6 weeks till I head for Bermuda!  ;-)

Posted by Unknown at 3:49 PM No comments: